Our good friend, advocate for bikers, humanitarian and overall great person Steve Schapiro has got Born-Free involved and aware of something bigger than motorcycles….and that is to be charitable and help others. Steve has been the face of the American Diabetes Association in the biker community for years and has raised awareness as well as millions of dollars for this deadly disease. This disease can strike anyone of any age…you might know someone who has it ( we know several) or you might have it yourself and not even know it. We all need to know about this disease and what can be done to treat it. This year Born-Free is going to raise some cash for ADA http://www.diabetes.org/ but more importantly raise awareness!
This story below was written by Beatnik of Easy Riders Magazine.

The history of bikers is a rich and crude tale of booze, blood, sex, blowing motors, burning rubber and pure goddamned knuckle-busting madness that we all love so much. Those of you who love and participate in the very beautiful thing called Born-Free understand and embrace this weird shit in a way that is truly inspiring. Thank you for letting your freak flags fly and for keeping motorcycling dirty and dangerous, just the way Zeus intended. You greasy bastards are the future of the chopper scene and if that’s true, the future is fucking awesome.
The other part of the grand biker tradition is a very simple concept, and it’s been there since the beginning: Bikers Giving Back. Blood drives, toy runs, veteran’s causes, Patriot Riders, Love Rides, Bad Rides, no history of bikerdom would be complete without mentioning all the good that our gnarled horde of drunken hooligans has accomplished through the years. And while some might mistakenly think that all this charity shit has been some publicity stunt to improve our image to the general public, real bikers know otherwise. It comes down to heart.

Nobody exemplified the heart of the hard-riding biker tough guy than Rip Rose, who, as the roving editor of Easyriders magazine, criss-crossed the country countless times from the late-seventies til his death in 2000. His travels, the stuff of legends, took him to every corner of this country, documenting the lives and stories of ordinary bikers of every stripe and circumstance.
Everywhere he went there were charity runs, big and small. From a poker run to buy groceries for the widow down the street, to the mega rides with casts of thousands, bikers everywhere were showing up and kicking down for the other guy.
When Rip was fighting his final battle with diabetes-related cancer, he and his longtime friend Steve Shapiro established Rip’s Bad Ride as his legacy to the world. Benefiting the American Diabetes Association, Rip’s Bad Ride has raised money and awareness to fight this disease that devastates so many. In the spirit of Rip, Born-Free is donating a portion of the entrance fee to ADA.
http://www.diabetes.org/ 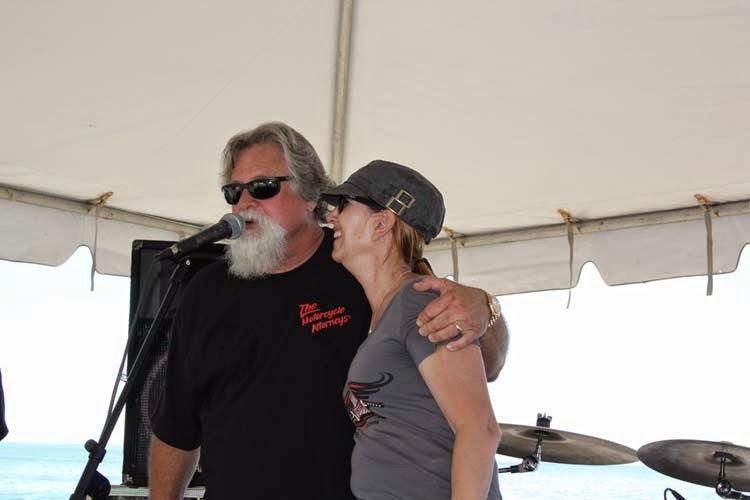