Paul Cox has been building amazing bikes for years. He is a true artist, a real craftsman and very humble guy. We are extremely excited to have Paul part of Born-Free 6 and can’t wait to see his creation. Here are a couple pics, a rendering of his concept and a few words from the man himself :::

Free Show. I’ve admired this event for several years now, and the group of builders
involved is diverse and inspiring. This will be my first “post”.
After living and working in this scene for about 25 years, I’ve seen a lot of “builders”
and shops come and go. I’ve personally gotten to the point where I really just keep to
myself, and don’t look around much at what other people are doing. The constant glut of
information and images makes it all too overwhelming. There’s never enough time to
digest what one guy did before you see 10 more versions of it, or 10 more concepts that
are even more amazing or aggravating. I don’t look at magazines and I don’t surf the
web, and I’m OK with that, but sometimes I feel like I may be missing out. The nice thing
about being asked to be a part of a show like this is that I get to meet people I never
would have, and see work that is truly innovative and exceptional.
It seemed there was a sort of “backyard backlash” that followed the TV-driven, false
rise in motorcycling visibility and economics in the early 2000’s. For a few years after, it
seemed like everyone was drawn to the rattiest flat black rusty death traps, because it
felt raw and real again, not fake and scripted. It was a movement that said “you can
build whatever you want with just the tools from your Mom’s kitchen drawer”, and it’s
OK. It’s even better than OK, it’s “righteous.” Clothes tried to look dirty and fresh,
expensive tattoos tried to look like crappy old prison ink. Shitty became the new shiny. It
was like the gluttonous Roman Empire giving way to an engineered, contrived version
of the Dark Ages. Well, in the past few years, there’s been a Renaissance. There’s been
a rebirth of creativity and passion for good motorcycles. The machines that are being
built today are leaps and bounds beyond what we were doing many years ago. Maybe
the geometry is the same and some of the basic concepts have become standard issue,
but the level of quality and innovation gets higher and higher each year…each day. This
is something that makes this time in Motorcycling beautiful and inspiring again. Whether
your bike is just to thrash around to the bars, go racing or to show, it’s still an extension
of you. I’m happy to say, I’ve been meeting and seeing some amazing builders and
bikes lately, and I don’t expect it to stop any time soon.
When I started thinking about what to build for BF6, I knew I wanted to run a cone
bottom end for smallness, modified heads, a magneto, and probably hard-tail a
swingarm frame I have laying around. One of the objectives being that I mostly use
parts I already have, and modify or create what I don’t. This isn’t a customer build and I
don’t have cash to throw at it. When I was prepping the frame to convert to hardtail, it
just felt like the retro castings vibe was becoming too flavor-of-the-month lately, so I
changed my mind. I’d done some frames from square tubing before, and thought that
would be a more unique approach for a project like this. To really get my bends square,
I had my friend Knucklehead Steve machine a following dye for my old hydraulic bender
that will hold the square tubing nicely on the sectional diagonal through the bend. At the
time of this writing, beginning of March, I’m just starting the frame and expect to have it
done in the next two weeks. As primarily a one-man-shop, I have zero down time so this
build will be a challenge to say the least.

The engine is based on a set of ’77 alternator cases that I’ve prepped and polished.

I’m going through flywheels, shafts, rods, pistons and pumps to see what I have to
make this work. For the top end, I originally wanted to run Panheads without tins and
build my own valve train using sealed bearings and linkages so it would run exposed
but efficient. Not just stock parts with a few squirts of grease and zerk fittings. But I
decided to use Shovel heads for the bigger valves, better flow and more surface area
on top to build my own rocker arms. My plan is still to make my own lifters, pushrods
and rocker arms to work exposed. I’ve planned a few different ways of doing it, but still
have a ways to go.
I’m building one of my Girdraulic front ends from stainless steel, and the triple trees
and rockers have already been EDM’d out of 17-4, just like my old Berserker fork. I’m
making the legs in a tubular ladder-bar style. For wheels I have a 14” X 5” rear and 23”
X 2.15” front, with stainless rims, spokes and hubs. I powder coated the rims black to
add to the visual hight of the sidewall. Tires are dual sports.
Kick only 4-speed, my chain primary, magneto, handmade tank, oil bag and fender. I’m
running drags on 6” risers and a dime store spotlight.
As always, thanks for the interest and support, not just for me, but for the great things
happening in bike building today….

Have a great day, P. 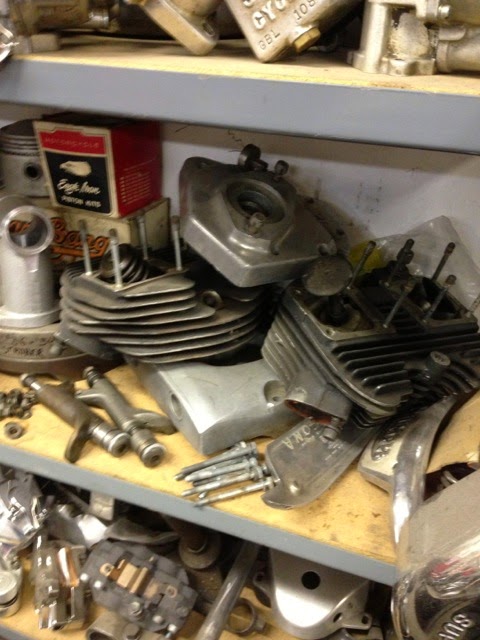 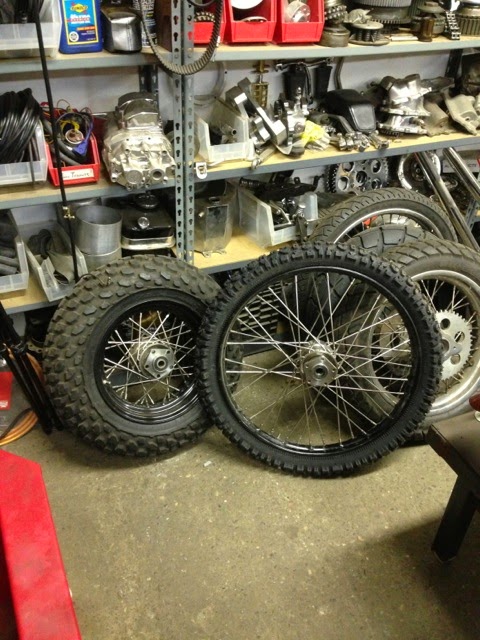 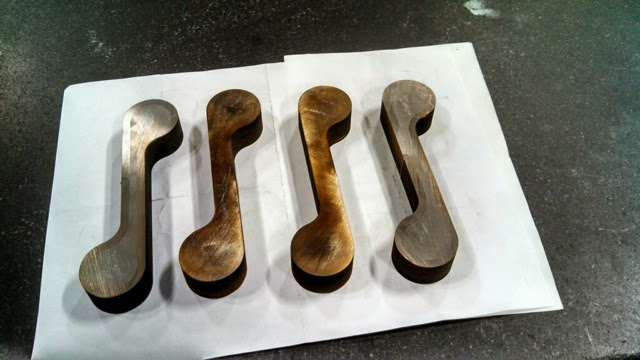 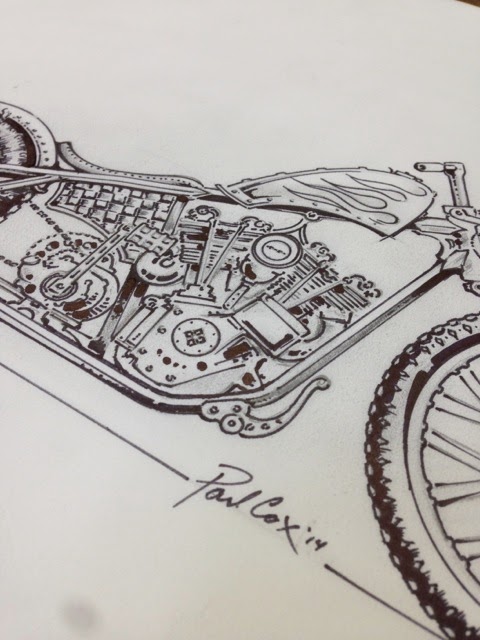 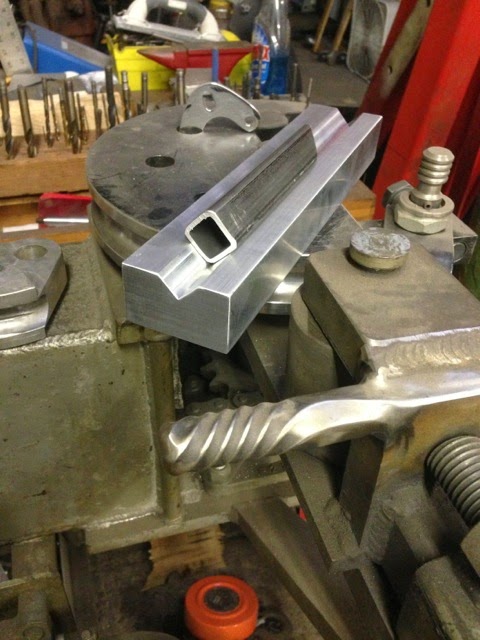 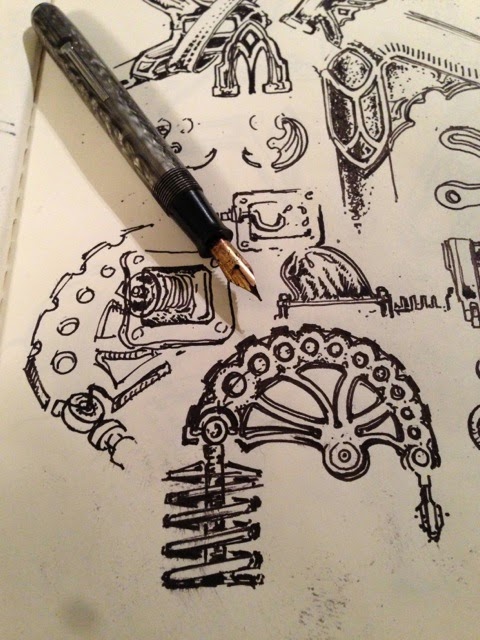 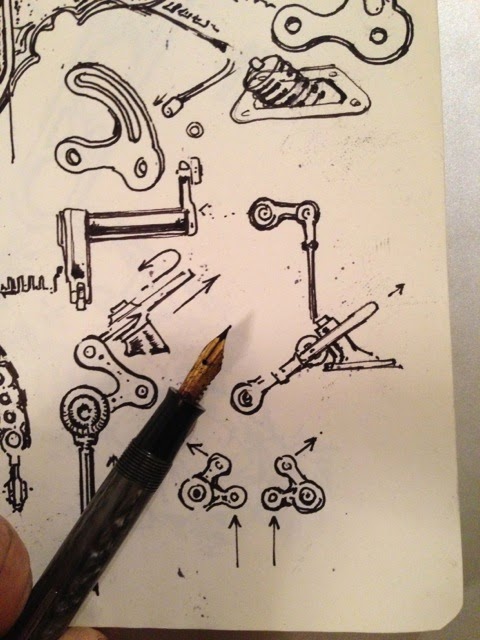 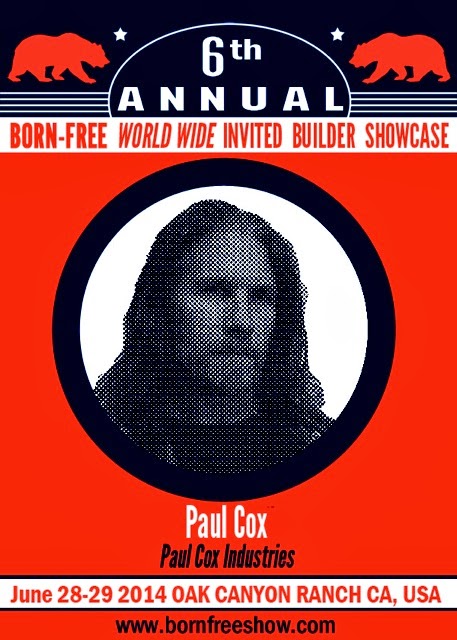