Skip to content
We would like to introduce to you one of our new Invited Builders, Jesse Bassett and his shop The Gasbox. Jesse has been building bikes for years in the Midwest and you’ll probably recognize a few of them like his Indian. We didn’t know Jesse other than seeing pics of his bikes, but people that know him gave high recommendations, so we decided to give him a call and see if he wanted to be a part of Born-Free 6.

He and his wife just gave birth to twins and showed a bike at the One Show in Portland, now Jesse saws it’s full speed ahead on his BF6 build, he has this to say about it:

“The bike I am building is based around a knucklehead engine
that has been in the Cleveland motorcycle family since the 60’s. I actually
know of every owner since then. It was built with 80ci flathead flywheels,
panhead cylinders with heads modified for the fire ring, and shortened shovel
head valves. I modified a stock VL frame and am fitting a Norton roadholder
front fork.

This is something I have wanted to build for awhile and am
us BF6 as an excuse.
I also included some pictures of some previous builds as
sort of a bio.
We are on Facebook and Instagram and Tumblr and Pinterest
and every other social apparatus as “The Gasbox” also the website is www.thegasbox.com. 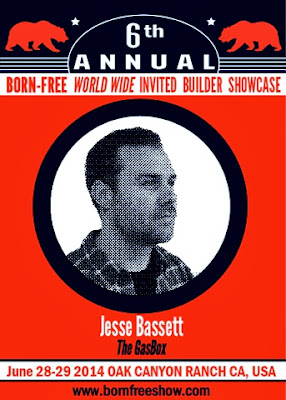