Hi Everybody,  I am really honored to be a part of the builder invite segment of Born Free Five this year.
Last year at born free four, the bike that I built with the help of my dad, wife and a few friends helped me build.   The whole process of building the bike, traveling to born free four, winning best in show and then traveling to the mooneyes show in Japan was truly life changing and I am so thankful that I got to experience so much because of some bike that  I worked on. 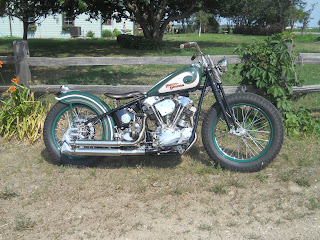 A lot of people have told me that– “You have to top the born free 4 bike now” or “how are you going to defend your crown?”  I never expected to have a crown or have to defend anything, just getting picked to build a bike for the show was more than enough for me.   I just wanted to build a bike that I really loved,  I am glad that other people dug it.   The bike that I am building for Born free Five is not going to top the last one,  there is no way that the bike could, because the bike that our small crew is building and prepping for the event is a 1923 Harley Davidson in a half mile keystone chassis. There is no cool way to mount the headlight, because there isn’t one, I cant make a cool brake set up because the bike doesn’t have brakes,  the bike wont have a neat set of mufflers, because the pipes will be 14 inches long,  well you get the idea…  there isn’t a lot of normal parts on the bike because its a race bike.  With that being said, the bike will be simple, clean and finished perfectly as well as  built to go fast. 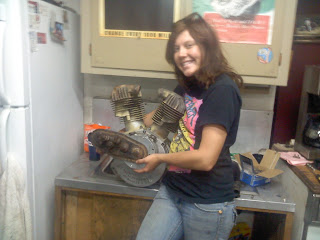 This is my wife’s engagement ring.   I bought it for her after the 2011 Davenport meet from my friend Buzz K in Connecticut.  I thought about buying Brittney a ring,  but rings just don’t appeal to me and thankfully they don’t have much appeal to her, plus they are dangerous in and out of the shop.   I figured that she would get more enjoyment out of a motor that we could build her a bike around.  Ever since we started hanging out and spending time together she would tell me about her dreams of building a board track style excelsior or Harley and racing it at an AMCA Meet or doing exhibition runs with it.  I figured this would be a good start.  1923 is a good year to choose because the cylinders have a big base pattern and the cases are a little more narrow than later jds. 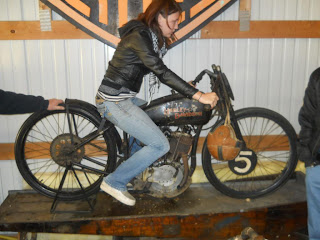 My friend Mike L in Milwaukee has been building bikes since the seventies.  He has been into old board track racing bikes longer than I have been alive.  He makes all sorts of parts for them,  from forks, to frames to everything in between.   He already makes all of the castings for the frames and can put one together a lot quicker and cheaper than I can,  plus he has 10 different bikes to use as a pattern for making whatever type of chassis you’d want. We loaded up britt’s motor and went to Milwaukee and tried out bikes,  here are some pics from the little vacation.Brittney said it was like getting a ring fit  lol.    Brittney is sitting on an original paint 1923 Harley Factory racer in this pic.  This is the chassis design that we ended up choosing to order.  It puts her in a slightly aggressive position, but she is still able to sit upright and in control . 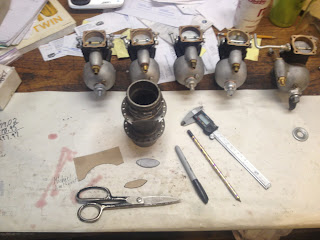 With the frame getting built by Mike, we could move onto the wheels, and front end.  I wanted to use as much old stuff as possible, but knew we would have to make some successions for practicality and safety reasons.  This is the hub that my friend Matt W. sold us.  It is a 1915 harley hub.  This style of hub was used for a long time on race bikes.  The feature that makes this hub so cool is that the spoke flanges are very close together.   Since this hub is almost a 100 years old, it needed some minor work.   The biggest problem was the chunk missing out of one of the spoke flanges.  Brittney made a template of the missing piece and cut one out of steel. 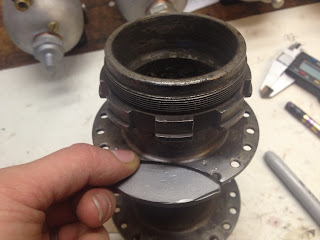 d
here is the piece that brittney cut out.   It is a little bit big, so it can be machined later on and be undetectable. 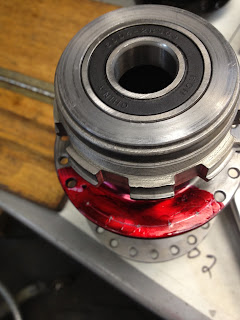 here it is all welded up and machined flat and round.  the only thing left to do is to drill the spoke holes. 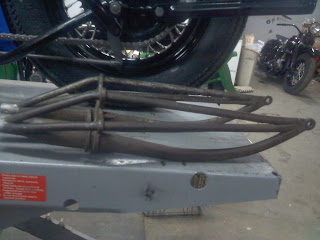 This is the coolest fork of all time.  I have wanted one of these for over ten years.  I was lucky enough to get to buy it from my friend Gene at an AMCA meet in Nebraska last February.  It is an excelsior military fork,  this style of fork has extra trusses on the outside of the regular rails and is so damn cool. 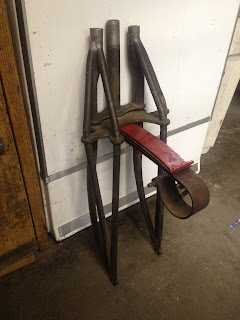 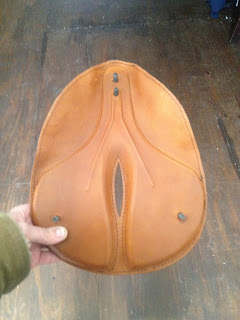 Here is the bottom.  It is really well crafted. I got it from Matt Smith at Antique motor works.
We will be doing a monthly update from now until June 29th.  Our frame should be done in February and we will be making a lot of progress on this bike in a short amount of time, since there are not too many parts to it and its all custom.  If you have any questions, please hit me up at amcayouthprogram@hotmail.com,  also please check out www.carlscyclesupply.com and www.oldbikesinsd.blogspot.com, and Brittney’s new blog for the racing effort at www.brittneyolsen.blogspot.com   for more old bike content.